The transformation of agriculture in 1978 and 1979 proceeded with little instigation from the top. The peasants sensed the opportunities provided by the loosening of the party’s political control and pushed ahead. It was a process marked by wide regional variation; there seem to have been as many different names for agricultural reform experiments during this period as there are counties in China. It was also very much a matter of trial and error. When the politicians learned what the peasants were up to, they usually waited for evidence of success before they committed themselves unambiguously. Wan Li and Zhao Ziyang could claim credit for letting the farmers do what came naturally. When the experiments of the peasants bore fruit, Deng publicized their success, recognizing a good thing when he saw it. But he certainly could not take credit for giving farmers the idea.

The irony, as American anthropologist Stephen Mosher realized, was that Western scholars at the time regarded the Chinese as incorrigible collectivists. “Group thinking” was considered an indelible part of traditional culture that predisposed the Chinese to Communist ways. As a result, Mosher had come to the countryside expecting to discover evidence that the peasants were fundamentally satisfied with the stability and predictability furnished by the regime. According to scholarly reasoning, the Communist Party had taken power in 1949 largely due to the support of the country dwellers. It had promised to improve the lot of the peasantry, and in this it had surely succeeded. After all, hadn’t the Communists brought schools and basic health care to even some of the most remote villages? Hadn’t they eliminated the corruption and tyranny of the old landlords? Upon his arrival, Mosher carefully noted all the characteristics of a traditional society that skewed visibly to collective ways of doing things.

The rampant cynicism and apathy that he encountered in China’s real-existing countryside thus came as something of a shock, and his account provides a fascinating chronicle of how a preconceived view can disintegrate upon contact with reality. But amid the ruins of Mao’s utopian edifice, Mosher also discovered intriguing evidence of a powerful source of transformative energy: individual initiative. Though they were far from the places where the most important experiments were under way, the people in Mosher’s remote Guangdong village had already picked up on the spread of the household-responsibility system, and he succeeded in capturing a nice snapshot of the spirit that, once unleashed, would soon lift hundreds of millions of people out of poverty. The old entrepreneurial mind-set of the Chinese “flared anew once opportunity presented itself,” Mosher noted. When one woman heard that the party might soon allow a return to household farming, she immediately began making plans to start cultivating her own mulberry patch, planting the bushes between the rows of trees on the farm. “You can’t do that now because people are careless when they work,” she explained to the American. “They would step on them when they are spreading mud [as fertilizer] or picking mulberry leaves. But I’ll be careful because they’ll be mine.”

Afghanistan as "University of Jihad"


The mujahideen struggle against the Soviets—a struggle that ultimately ended with a humiliating retreat for the forces of Moscow—filled Muslims around the world with pride. This glorious victory seemed to many a confirmation of what the Islamists had been arguing all along: with God’s help, anything is possible. (The Quran is replete with verses promising victory to those who are faithful to God.) The triumph of the Afghan jihad inspired Muslims in a general way, but it gave particular impetus to the more militant strains of Islamist thought. The full psychological impact is hard to quantify, of course. One of the most concrete effects can be seen in the later journeys of the non-Afghans who personally participated in the war against the Soviets. Garlanded by their participation in the glamorous Afghan jihad, the Afghan Arabs and their fellow Islamist internationalists personally embodied the message of armed resistance to the infidels and the apostates. Not for nothing would Afghanistan in the 1980s come to be known as the “University of Jihad.”

Inevitably, however, Azzam’s very success as a leader and religious thinker inspired competition. Another Arab who made the pilgrimage to Peshawar was Ayman al-Zawahiri, who arrived in Pakistan in 1985. Trained as a doctor and a religious scholar, he was an alumnus of the Muslim Brotherhood who had been imprisoned after the killing of Anwar Sadat in 1981. Though professing eagerness to help the Afghans in their jihad against the Soviets, he spent much of his time in Pakistan on Egyptian affairs. He soon became the leader of a new group of Egyptian radicals that dubbed itself the Egyptian Islamic Jihad. Azzam was soon complaining to his associates that the Egyptians were gaining influence over his protégé Bin Laden, who was already becoming a lodestar of the jihadi movement. There is much speculation, indeed, that Zawahiri and his confederates orchestrated the killing of Azzam as part of a plot to take over control of his organization.

But the nascent al-Qaeda and Egyptian Islamic Jihad were not the only ones bent on extending the Afghan war to the rest of the world. Another group of Egyptian radicals, mercilessly persecuted by the government at home, set up operations in Peshawar and in the eastern Afghan city of Jalalabad in the mid-1980s. This was al-Gamaa al-Islamia, the Islamic Group, which had engineered the assassination of Sadat. One of the group’s most prominent figures in its exile was Mohammed Shawki Islambouli, the brother of Sadat’s killer. Its religious leader was Sheikh Omar Abdel-Rahman, known as the “blind sheikh,” who had also studied under Azzam and ultimately played a key role in the MAK after Azzam’s death. He established close relations with Bin Laden and Hekmatyar. In 1990 Abdel-Rahmen traveled to the United States, where his preaching inspired a group of young Muslim radicals to bomb the World Trade Center in 1993. Later in the 1990s, al-Gamaa al-Islamia launched a series of assassinations and terrorist attacks across Egypt that culminated in the Luxor attack of 1997, in which the group’s operatives massacred 62 people (mostly foreign tourists).

After Azzam’s death, Bin Laden and Zawahiri—the latter often characterized, with some justification, as the “brains” of al-Qaeda—presided over a remarkable expansion of global jihadist aspirations. Afghanistan-trained holy warriors dispersed to the four winds. They fought in Bosnia and Chechnya and lent support to the Islamist regime in the Sudan (where members of the Islamist camp had first joined the cabinet back in 1979). Muslim Filipinos returned home from the training camps in Afghanistan to found a revolutionary jihadi organization of their own, which they called Abu Sayyaf.

In Indonesia a veteran of the Afghan jihad named Jaffar Umar Thalib founded Laskar Jihad, a terror group that aimed to form an Islamic state in a far-flung corner of that sprawling country. Another Indonesian by the name of Riduan Isamuddin arrived in Afghanistan in 1988, where he also sought close ties to Bin Laden. Under the nom de guerre of Hambali, he later gained notoriety for his work as the operations chief of the Jemaah Islamiah, Indonesia’s most prominent militant Islamist organization. Aspiring to create a caliphate unifying the Muslim populations of Southeast Asia, he orchestrated a series of terrorist attacks that included the notorious Bali nightclub bombing of 2002, which took the lives of 202 people. Veterans of the conflict in Afghanistan also played an incendiary role in the brutal Algerian civil war that scourged that country in the 1990s, after the secular government annulled the results of an election won by Islamists. As many as 200,000 Algerians died in the fighting, which dragged on for years.

In Central Asia, still other alumni of the “University of Jihad” joined forces with the Islamists in the former Central Asian republic of Tajikistan, fighting on their side against ex-Communist secularists in another bloody civil war that tore that country apart in the 1990s. One of the men who participated on the Islamist side in that conflict went by the nom du guerre of Juma Namangani. Born in the Soviet Central Asian republic of Uzbekistan, he had fought in an elite paratrooper unit on Moscow’s side during the war in Afghanistan. The experience had radicalized him, transforming him into a zealous holy warrior. He was among the founders of the Islamic Movement of Uzbekistan, arguably the first transnational Islamist guerrilla group to emerge from the former USSR. His soldiers fought on al-Qaeda’s side in post-9/11 Afghanistan. In this way, too, Moscow’s 1979 intervention in Afghanistan unleashed surprising demons. 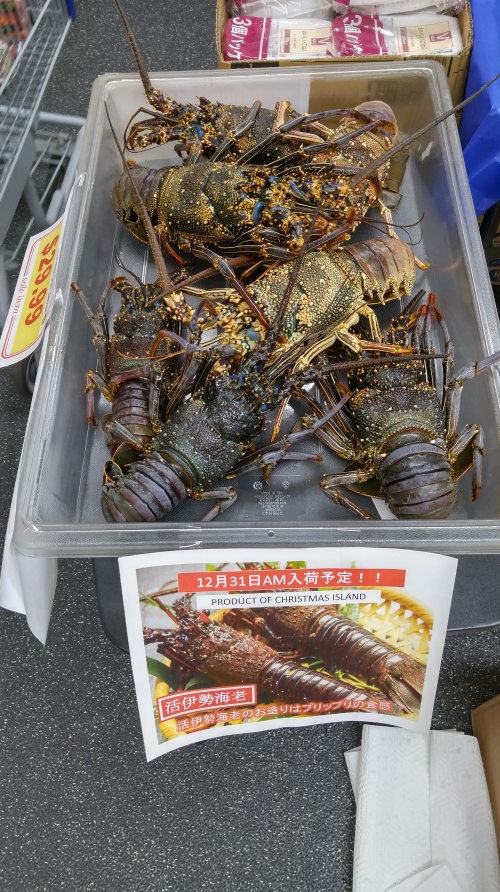 The local branch of Nijiya ('rainbow shop') Japanese supermarket in my neighborhood advertised live lobsters from Christmas Island on New Year's Eve. I'm not sure which Christmas Island they were from (probably the one spelled Kiritimati in Kiribati, where /ti/ is pronounced [si]). The kanji string 活伊勢海老 on the poster gave me some trouble. The character 活 katsu means 'living', and the lobsters were indeed still alive. The characters 伊勢 ise presumably refer to Ise Bay off Ise Grand Shrine in Mie Prefecture south of Nagoya (Aichi Prefecture). And the last characters 海老 (which look like they could be read kairou 'sea-old') spell ebi (usually spelled in katakana エビ) 'shrimp, prawn, lobster', a general name for members of the order Decapoda. The more common name for 伊勢海老 Ise ebi is ロブスター robusutaa 'lobster'.