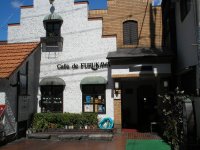 塩盛り shiomori 'salt pile' - The other night, as we were leaving our favorite local fish restaurant in Ashikaga, my recently arrived Minnesota in-laws noticed what looked like a small pile of snow beside the door as we left. It turned out to be salt, and there was a matching salt pile on the other side of the entranceway, so I went back in and asked the very friendly and talkative sushi chef (who trained 3 years in San Francisco and 1 on Maui) what the story was. There were no customers at the sushi bar at that moment, so he came outside in the chilly wind and told us the story. The salt has two functions. The most commonly recognized one is to purify the premises by keeping evil spirits out. But the more interesting one is to attract customers in. The latter function apparently goes back to the days when goods traveled by oxcart. The idea was to tempt the oxen to stop and lick the salt, whereupon the traveler might also decide to stop for food or rest. The salt piles were called 塩盛り shiomori 'salt helpings', a term which is otherwise chiefly found in restaurant menus for assorted salty dishes.

義母 gibo 'mother-in-law' - Earlier that same evening, I had introduced my visiting in-laws to the waitress in that same fish restaurant. Both she and the sushi chef are always happy to assuage my curiosity about obscure readings (obscure to me, anyway), especially of fish names and sake brands. After I had introduced my mother-in-law as my 義理の母 giri no haha, she referred to her by a shorter version, 義母 gibo. So I asked her what the shorter version is for younger sister-in-law, 義理の妹 giri no imouto. In comprehensive kanji dictionaries, you can find 義妹 gimai, but she had never heard that term. The only such shorter term she had heard was 義兄 gikei 'elder brother-in-law'. The longer version is 義理の兄 giri no ani, and my New Nelson's kanji dictionary lists the full range for siblings-in-law: including the combining terms 義姉妹 gishimai 'elder and younger sisters-in-law' and 義兄弟 gikyoudai 'elder and younger brothers-in-law'. (The 義理 giri here is the same one used to mean 'duty, honor, debt of gratitude'; and the shorter prefix 義 gi is also used to indicate artificial human components, as in 義歯 gishi 'artificial tooth' or 義眼 gigan 'artificial eyeball'.)

紅き羹 akaki atsumono 'vermilion broth' - one of our two favorite coffee shops in Ashikaga is Café de Furukawa, an elegant place whose 12-page menu and guide to coffee history and brewing is titled 紅き羹 akaki atsumono, a purposely archaic and obscure phrase that I've translated 'vermilion broth'. Both elements tell a story. The reading aka for 紅 is archaic in Japanese, and the pronunciation akaki for akai 'red' is both archaic and regional, I believe. Nowadays, akai 'red' in Japanese is written 赤, while 紅 is normally read beni 'crimson, rouge, vermilion, lipstick', as in 紅生姜 beni shouga 'red pickled ginger', 紅染め benizome 'red-dyed cloth', or 紅鮭 benizake 'red salmon'. Chinese 紅 hong still means 'red' (and shows up in many given names of people born during China's Cultural Revolution). Its Japanese rendition kou- shows up in many compounds such as 紅茶 koucha 'red tea' (= 'black tea' in English), 紅海 Koukai 'Red Sea', and 紅灯 koutou 'red lantern, red light (district)'. The much rarer character 羹 atsumono 'hot soup, broth' (literally 'hot stuff') has a much shorter story. It shows up in a Japanese proverb that matches English "Once bitten, twice shy": 羹に懲りて膾を吹く Atsumono ni korite namasu o fuku 'Learning from hot broth, you blow on cold pickles'.

UPDATE: Thanks to Language Hat reader Matt for catching a grammar error in my rendition of the coffee-shop title. I originally wrote 紅きの羹 for what is actually 紅き羹. I've made the correction in the text above. Another Language Hat commenter turns up a different explanation for the doorway 塩盛り in a fun Youtube video guide to eating sushi.
Posted by Joel at 3/21/2006 02:38:00 AM

Hello, I just noticed your mention of Cafe de Furukawa. I have been to this coffee shop also, as it is owned and operated by the parents of my ex-girlfriend. Her father is really into words and interesting words and, yes, purposefully uses interesting kanji and is overly wordy etc. If you have anything else to say about the coffee shop, I'd love to hear it. I've yet to convince him to try organic coffee beans as he is very attached to his relationship with his distributors etc. which apparently do not deal in organic coffee. I find is hypocritical that someone so deeply interested in creating coffee of the utmost quality doesn't try organic beans -- they will definitely have a much improved flavour.

Small world! We probably spent more time at Cafe Mocha a few blocks straight north of the JR Ashikaga station. A lot more down-to-earth, but you need to be able to tolerate occasional smoking. A lot of my Ashikaga-area experiences are summarized in a rather comprehensive Wikitravel entry for the city.