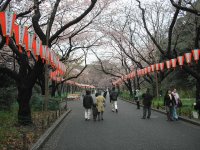 The other day, this Outlier took his in-laws down to Ueno station to pick up our 1-week JR rail passes and take a peek to see how the cherry blossoms were coming along at Ueno Park. The blossoms were just beginning to appear, and so were the snack and sake vendors.

One spot we lingered at was 不忍池 Shinobazu Ike, the name of which illustrates two troublesome aspects of Japanese attempts to write their own language using only Chinese characters.

The name of the pond is written in kanbun, a contorted method of rendering Japanese by means of Chinese syntax. The written Chinese characters, in order, translate as 'not hide pond', but the spoken Japanese, in morpheme order, translates as 'hideth-not pond'. (The verb 忍ぶ shinobu has a range of meanings and, frankly, I'm not sure which one was intended by the placenamers.) The -zu ending is just a more formal and archaic version of the negative -nai. Wikipedia explains the contortions of kanbun rather succinctly, wherein Chinese sentences are read as Japanese in a sort of simultaneous translation (saving the verb to the end, and so forth).

The term 池 ike for the body of water is sometimes translated 'lake'. As kids in Kyoto, we used to ride our bicycles up to a then rustic reservoir called Takaragaike 'Treasure Lake', now the site of a fancy international conference center. But the usual Japanese term for larger lakes is mizuumi, which is transparently composed of 水 mizu '(fresh)water' + 海 umi 'sea' but written with a single Chinese character, 湖 (pronounced hu in Chinese and ko in Sino-Japanese, as in Biwa-ko 'Lake Biwa'). A similar bit of Japanese morphology obscured by a single Chinese character is 雷 'thunder' (Chinese lei, Sino-Japanese rai), which probably could have been rendered as 神鳴り kami-nari 'god-sound'.

William Wetherall has a lot more on happenings around 不忍池 in a fascinating compilation on Bakumatsu and Early Meiji Newspapers. Here's how he explains why he translates the 1868 experiment 江湖新聞 (Koko Shinbun, lit. 'riverlake news') as World News:

Though "koko" (C. jianghu), literally "rivers and lakes", is nearly a dead word in Japanese today, it was a fairly common expression in the mid-19th century. It is the keyword in the title of the column that reported stories of social and human interest in Tokyo nichinichi shinbun in 1872. It was part of the title of a popular book in 1873. And it appeared in the inaugural issue of the news nishikie in 1874.

In references to classical China and Zen, "koko" it is pronounced "goko". [With regard to] China, it refers to the world of the Yangzi river (Changjiang) and Dongting lake, and in certain Chinese folklore it alludes to the fighting spirit of outcasts who protect themselves with martial arts. As a Zen term, it signifies a place where monks and other practitioners gather from all quarters. If all roads lead to Rome, then the whole world is in Rome.

In the title of Koko shinbun, "koko" signifies the "world" or "society" one lives in -- much like "sanga" (mountains and rivers) is a somewhat nostalgic reference to one's country as a homeland. In this sense it is very close to its general usage in Chinese today to mean the wide (and sometimes an idealized) world.