Dracula vs. the Transylvanian Germans 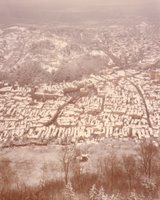 In the winter of 1459 Dracula organized one of his most devastating raids on Transylvanian soil, with the clear intention of trying to seize Dan III and his supporters. [The Drăculeşti and the Dăneşti were two factions contending for the crown of Wallachia.] Advancing along the valley of the Prahova River, he delivered his first blows in the vicinity of Braşov [German Kronstadt], where he burned villages, forts, and towns, burned the crops to deprive the population of food, and killed men, women, and children as he progressed. He focused his attention on the exposed Braşovian suburbs, especially the Spenghi and Prund areas, which were located outside the walls of the fortress. This was the Romanian section of town, where Dan III and his dissident boyars resided. Under cover of darkness Dracula's men burst across the lightly fortified wooden palisade surrounding the section. He then proceeded to burn the whole suburb, including the old chapel of Saint Jacob, built in 1342, located at the foot of Tîmpa Hill; it was never restored. He took as many captives as he could find and impaled them "lengthwise and crosswise," according to Beheim's narrative. Their bodies were strung on Tîmpa Hill above the chapel. Dracula meanwhile was seated at a table having his meal; he seemed to enjoy the gruesome scenario of his butchers cutting off the limbs of many of his victims. Beheim tells us the additional detail that the prince "dipped his bread in the blood of the victims," since "watching human blood flow gave him courage." The stage was thus set for Dracula's later reputation as a blood drinker or vampire, and his subsequent fictional reincarnation as Count Dracula. As we will see, this episode at Tîmpa Hill did more to damage Dracula's reputation than any other act in his whole career. On this occasion Dracula also displayed the perverted black humor that is attributed to him in Russian narratives. A boyar attending the Braşov festivity, apparently unable to endure any longer the smell of coagulating blood, had the misfortune to hold up his nose and express a gesture of revulsion. Dracula immediately ordered an unusually long stake prepared for the would-be victim and presented it to him with the cynical remark: "You live up there yonder, where the stench cannot reach you." The boyar was immediately impaled....

But these raids and accompanying atrocities against the Germans of Transylvania during the years 1457 and 1460 were to have a long-range impact that reached far beyond the borders of Romanian countries. Those German Catholic monks who were fortunate enough to escape from their monasteries, which had been reduced to ashes, brought with them to the west what in essence became the first Dracula "horror stories." Thus, Dracula in his own lifetime became a subject of horror literature. At the monastery of Saint Gall in Switzerland, at Lambach near Salzburg, and at the Melk Abbey on the Danube River in Lower Austria — all Benedictine houses — these refugees related their harrowing escapes to the other monks. These stories were copied down, mostly by scribes, and in turn used at the opportune moment as propaganda against the prince by the Hungarian chancellery. Among the refugees who had fled Dracula's terror was a Bernardine lay brother who is simply referred to as "Brother Jacob." He was to become the chief informant to the Swabian minnesinger Michael Beheim. Among the later German texts that included Beheim's account, one printed at Strassburg in 1500 was prefaced by a woodcut showing Dracula seated at a table surrounded by rows of impaled cadavers. This image suggests clearly that the bloodthirsty Count Dracula of fiction and movies was born from the loins of the bloody practitioner of terror in Transylania.

Email ThisBlogThis!Share to TwitterShare to FacebookShare to Pinterest
Labels: Romania