A Visit to Japan's "Little Brazil" 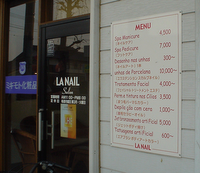 Recently, we set out from Ashikaga for 大泉 Ôizumi, Japan's "Little Brazil" in neighboring Gunma Prefecture's fanhandle to our southwest. At 太田 Ota ('Widefield'), we transferred to a 2-car, 2-stop, infrequent shuttle train running back toward the southeast to Higashi Koizumi ('East Littlespring'). There we had to transfer to yet another 2-car, 2-stop, infrequent shuttle train running back southwest to the end of the track at Nishi Koizumi ('West Littlespring'). The fare adjustment official at Ota described Nishi Koizumi as the most bustling (にぎやか) of the three Littlesprings (East, Middle, and West) that make up Bigspring.

Well, wherever the bustle was, we didn't see it. The tracks ended where the single platform ended at Nishi Koizumi. We walked straight south from the train station, crossed over a highway busy enough to warrant a pedestrian overpass, past a small fountain (maybe the 'littlespring' itself) that marked the beginning of a very long and pleasant walkway and bikepath (the Izumi 緑道 'Greenway') shaded by a great variety of trees and bushes, most of them labeled, so that I repeatedly stopped to punch the katakana names into my little electronic dictionary to find the English equivalents.

To our right ran the kilometer-long fence punctuated by gated driveways enclosing a quiet but huge Sanyo electronics factory. To our left ran sleepy Hanamizuki-dori 'Dogwood Avenue', which hosted occasional trucks and vans making deliveries. Hardly anyone but a few stressed-out middle managers was making use of the jogging path. Across the road were a variety of smaller enterprises: a few stores, a few restaurants, and a preschool teacher-training school followed by Santa Clara (聖クララ) preschool.

The name of the school and the distant sounds of Portuguese rather than Japanese coming from its parking lot were among the few signs of the town's large Brazilian population. Other clues were: a cardboard sign next the train ticket vending machine at the station that listed all the destinations in a Portuguese-friendly transcription; a small shop near the station that sold goods imported from Brazil, Peru, and Bolivia; and the Primavera Restaurant, which we noted for our return. It was nearing lunchtime.

Primavera was an interesting oasis, like a midwestern truck stop in many ways. The kitchen help spoke mostly Japanese, the customers spoke mostly Portuguese, and the menus and wait help were bilingual in Japanese and Portuguese. The music was mostly Country & Western in style, but with the lyrics in Portuguese. The featured buffet (バイキング [Viking] = smorgasbord) was discounted from ¥1600 to ¥1000 because it had run out of most of the grilled meats--and also the feijoada, I discovered after I ordered it. My wife went for just the salad bar portion. At the register, I asked the European-looking owner (in Japanese) how long he had been in Japan. He said 2 years this time, but 5 years in all. (Nikkei Brazilians can easily get work visas for 3-year stints.) His soft-spoken Japanese was even more limited than mine. He estimated the local population was at least 10% Brazilian, maybe 15%.

On our way back to the station, we stopped in at the small import shop, whose owner greeted all his customers with "Tudo bem?"--followed by "Konnichi wa!" if they looked Japanese. He looked to be Nikkei, and his Japanese was very fluent. He said he had been in Japan 7 years in all. He said the local population was 15% Latin American, with 10% from Brazil alone.

When we got back to the sleepy station, we found that we had a 45-minute wait until the next train, so we east headed down the line of shops beside the main highway (National Route 354), finding nothing at all. When we stopped to ask, we were directed to the Mos Burger, with its American southwestern decor, and sipped our tall ice coffees until it was time for the zigzag sequence of short train hops back home.

There are no doubt many North American equivalents of Nishi Koizumi, but it reminded me of the hidden charm and factory-sequestered bustle of an Austin, Minnesota--the Hormel company town that hosts the Spam Museum--especially if Austin had a little larger Hispanic population.
Posted by Joel at 9/26/2005 11:19:00 AM

Email ThisBlogThis!Share to TwitterShare to FacebookShare to Pinterest
Labels: Brazil