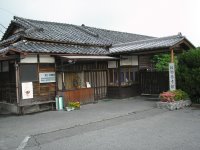 Kiryu (桐生), in Gunma Prefecture's southeast fanhandle, was an early center of silk manufacture, a later pioneer in textile manufacturing, and now home to Gunma University's Faculty of Engineering, which offers this glimpse at its industrial transitions.

Kiryu is often referred to as "the Eastern Kyoto". Like Kyoto, Kiryu has over 1,000 years of history behind it and owes its wealth and tradition to the silk textile industry. Even now, Kiryu is a major centre for the manufacture of kimonos (traditional Japanese wear). The precise origins of the silk industry in Kiryu have been lost in the mists of time, but according to local legend a young man from Kiryu won the heart of a princess at the Imperial Court in Kyoto with his exquisite poetry. They eventually married and returned to Kiryu, where she taught the local inhabitants the art of weaving. There are records of silk production in Kiryu dating from the 10th century. Over the years, the silk industry grew and flourished in Kiryu. Kiryu silk was sent to the Imperial Court and was used by the Tokugawa Shogun for his army's battle banners in 1600. Kiryu became the site for a major silk market which drew merchants from all over Japan.

However, in recent years the kimono was been largely replaced by Western-style suits and dresses. The golden age of the silk industry has now passed.

With the decline of the silk industry the people of Kiryu adapted themselves to new industries, mainly the production of automotive parts, electronics and related industries. However, Kiryu has become a major producer of another typically Japanese product--pachinko machines! (Pachinko is a type of pinball which is extremely popular in Japan.)

An article by Tomoko HASHINO entitled "Power-looms and the factory system: the relation between production systems and technology choice in the silk textile industry in Kiryu in the 1910s" has more about the early transition from hand looms to power looms. The abstract from Socio-Economic History, vol. 63, no. 4, follows.

Recent studies have clarified some special features regarding the introduction of power-looms, especially in pre-war Japan. One of the more important findings was the close relationship between particular production systems and technologies, for example the factory system and power-looms and the putting-out system and hand-looms.

There were some reasons that promoted the adoption of the factory system. OJT (on-the-job-training), which played a role in maintaining the quality of goods, was an important reason in Kiryu in the 1910s. As past studies point out, institutional, technological and market factors were other reasons that promoted the introduction of power-looms there. While both electrification and the establishment of domestic and local power-loom suppliers were very important, it appears that the change in raw material from raw silk to rayon in the 1920s was the decisive factor in accelerating mechanization. The fact that hand-loom factories have often been categorized as "manufacture" has been a controversial issue among historians. But we must recognize the significance of their role in controlling workers and turning them into a skilled labor force.

Japan is a very nice! and the pachinko is very nice game! it is very popular in EU too! I like it so much, but in japan it is real madness